by Jennifer Griffin
Blindspot left fans with quite the cliffhanger this Fall, didn’t it? We’re just thankful the wait for new episodes hasn’t been a long one. When we last checked in on Jane (Jaimie Alexander) and the team, she had successfully, if only temporarily, thwarted Shepherd’s (Michelle Hurd) plans for a devastating attack on US soil. However,... Read More

Blindspot left fans with quite the cliffhanger this Fall, didn’t it?

We’re just thankful the wait for new episodes hasn’t been a long one.

When we last checked in on Jane (Jaimie Alexander) and the team, she had successfully, if only temporarily, thwarted Shepherd’s (Michelle Hurd) plans for a devastating attack on US soil. However, in the process, Jane was forced to confront her brother Roman (Luke Mitchell) about which side she was really on.

Not willing to lose Roman a second time, Jane made the shocking decision to dose an injured Roman with the same drug that erased her memories. Her hope? That Roman will wake up a blank slate — one that can be used as an asset for the FBI, just like his sister.

You know what they say. A family that injects each other with potentially deadly brain-altering drugs …

Meanwhile, Patterson’s (Ashley Johnson) streak of bad luck with men showed no sign of abating after she discovered that new beau Doctor Borden (Ukweli Roach) was a mole who had been secretly working alongside Shepherd all this time. And what was even worse was the fact Borden knew Jane long before she became Jane Doe. Needless to say strong words were spoken. Guns were drawn. Bullets were fired. We don’t think this couple is ever getting back together. But who’s soft bits did that bullet find? Patterson’s or Borden’s?

The season premiere will pick up right where we left off, but with added stakes. Patterson is officially missing (oh oh!) and a newly amnesiac Roman is on the loose.

Now Jane and Weller (Sullivan Stapleton) must race Shepherd  – and the clock – to find them both before it’s too late.

Blindspot’s Winter premiere is called “Nor I, Nigel, AKA Leg in Iron” (Sometimes we wonder if the Blindspot writers  just make up random words so they can laugh at us media types and our headlines.)

While you wait you could do worse than check out our just-released gallery of photos from the Blindspot Season 4 Premiere episode below. 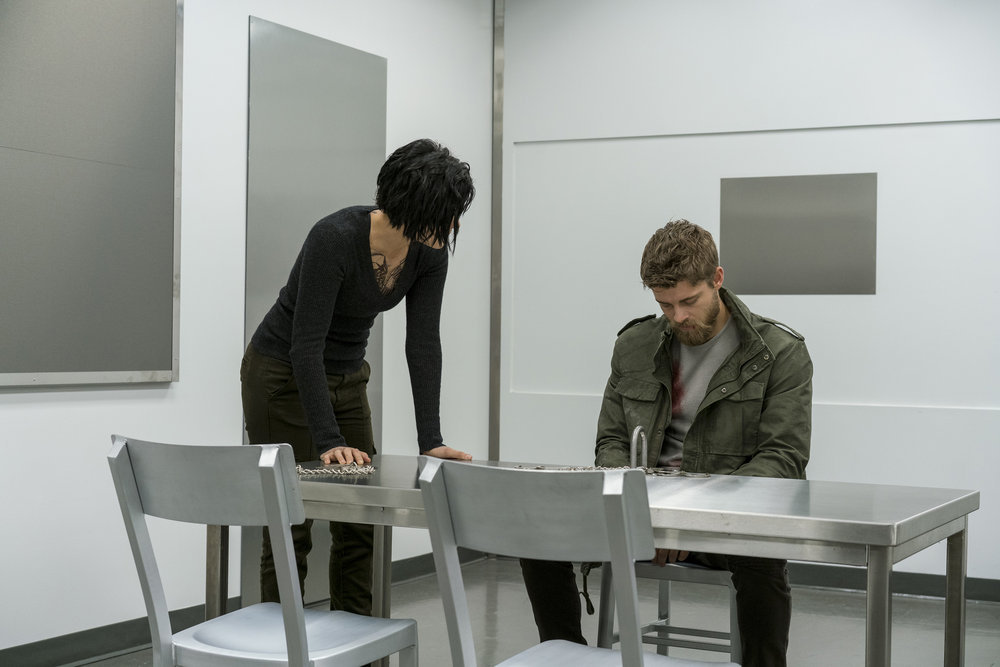