IMAGES: Defiance Season 3 Episode 10 “When Twilight Dims the Sky Above”

by Jennifer Griffin
Datak Tarr has either just had a very bad day, or a very good day, depending how you look at it. Following recent events on Syfy’s Defiance, one thing is clear. Our resident villain will live to fight another day, even if it’s now without his left arm. However, April 7th episode will see another... Read More

Datak Tarr has either just had a very bad day, or a very good day, depending how you look at it.

Following recent events on Syfy’s Defiance, one thing is clear. Our resident villain will live to fight another day, even if it’s now without his left arm.

However, April 7th episode will see another Tarr under the spotlight when Stahma’s loyalties are tested after her assumed-to-be-dead husband returns to town.

Is that posthumous pardon still good?

We can’t help but wonder if the finale is headed towards a tough choice for Stahma between Alak or Datak.

And, according to Syfy, T’evgin will take another step towards acclimating to life on Earth.

We’ve got a handful of new images, courtesy of Syfy, to share from the episode, below.

Yes, that is Nichole Galicia’s Kindzi we see standing alongside her father in one photo. We’re not sure if this is a flashback, flash-forward or flash-sideways, or if this cunning Omec has somehow managed to escape her prison on board T’evgin’s ship.

Either way, we’re stoked for Friday and all the trouble Datak’s return is sure to bring.

DEFIANCE -- "When Twilight Dims the Sky Above" 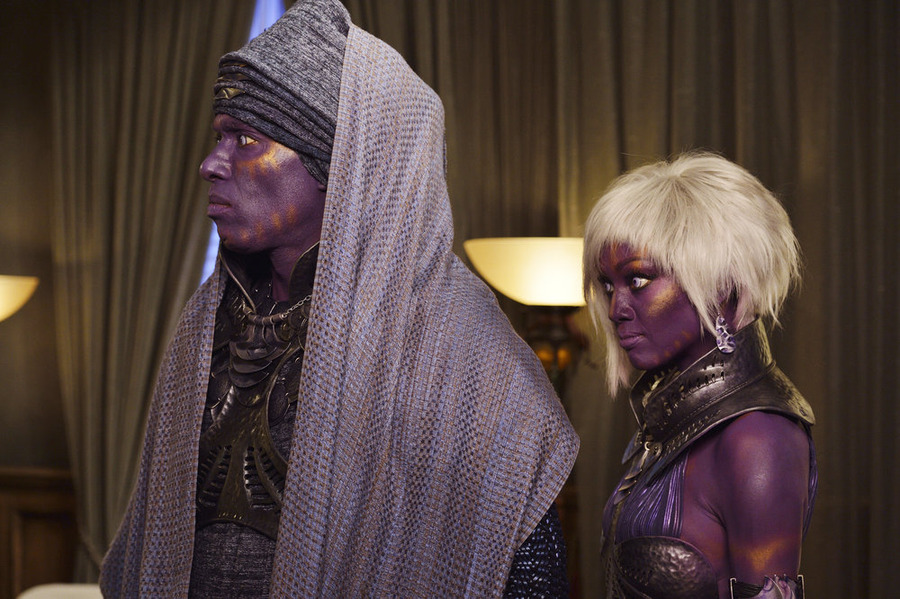 Defiance Gallery: Season 3 Episode 13 “Upon the March We Fittest Die”

IMAGES: Defiance Season 3 Episode 11 “Of a Demon in My View”