Holmes and Watson are about to reunite for a special two part story which will shed more light on Kitty’s harrowing backstory, as an old threat to her safety reappears in New York, on CBS’ Elementary.

The episodes “The Illustrious Client” and “The One That Got Away” will see Stuart Townsend (Betrayal, The League of Extraordinary Gentlemen) guesting as Del Grunner, Watson’s new employer at the insurance company.

We’ve got some official log lines for both episodes below, along with a gallery of images from the first installment.

“The Illustrious Client” – In the first episode of a two-part event, Watson begins her new job as an in-house investigator for an insurance firm. However, her attention shifts to a case that is personal for both her and Holmes when they join forces to eliminate an imminent threat to Kitty, on ELEMENTARY, Thursday, Jan. 22 (10:00-11:00 PM, ET/PT), on the CBS Television Network.

“The One That Got Away” – As Kitty begins to unravel due to the imminent threat to her safety, Sherlock and Joan intensify their efforts to help her. Also, the origin of Sherlock and Kitty’s relationship is revealed, on ELEMENTARY, Thursday, Jan. 29 (10:00-11:00 PM, ET/PT), on the CBS Television Network. 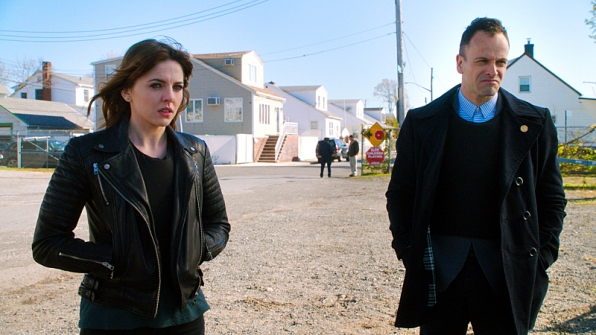