LUCIFER Celebrates Detective Day in “All About Her”

by Jennifer Griffin
A clever but diverting flashback to season one followed by a mini hiatus of sorts may have left some Lucifer fans scratching their heads over where we all left off with this season’s big storyline. The show returns to our screens tonight, and is thankfully back on track, picking up the up the threads of December... Read More

LUCIFER: L-R: Lauren German and Tom Ellis in the “All About Her” episode of LUCIFER. CR: FOX

A clever but diverting flashback to season one followed by a mini hiatus of sorts may have left some Lucifer fans scratching their heads over where we all left off with this season’s big storyline.

The show returns to our screens tonight, and is thankfully back on track, picking up the up the threads of December 11th’s pivotal “The Sin Bin.”

As you may recall, that episode saw Amenadiel (DB Woodside) and Linda (Rachael Harris) getting together, and Maze (Lesley-Ann Brandt) not liking the idea at all. Meanwhile, Chloe (Lauren German) had strong words for Lucifer (Tom Ellis) after he went rogue and kidnapped the Sinnerman from under her nose, putting Dan’s (Kevin Alejandro) life in danger in the process. And finally, grouchy Marcus Pierce (Tom Welling) revealed himself to be none other than the biblical figure Cain in the hour’s closing moments, following a calculated but no less shocking stabbing by Lucifer.

Got all that? Good! You might just be interested in some exclusive ScreenSpy scoop before tonight’s new installment. As usual, we’re avoiding outright spoilers, but as the old saying we just made up goes — one man’s gentle teaser is another man’s great big flaming spoiler, so proceed with caution, won’t you?

Yes, Pierce is Cain, the world’s first murderer, and following his brutal stabbing at Lucifer’s hands, Adam’s son has some confessions to get off his chest, including one that involves of those “Look into my eyes” moments.

We don’t know if the answers will make you like (or loathe any less) the precinct’s perpetually grumpy Lieutenant, but at least you’ll know what finally makes him tick.

Also look out for Pierce’s special deal with the devil. It’s a doozy!

And on the subject of revelations, you’ll finally find out who dropped Lucifer in the desert this week, and why. And although the whole ‘Why are my wings back?’ and ‘Where is my devil face?’ conundrum is still officially unsolved, Lucifer will feel he’s gained clarity on the issue by the hour’s end … in that special way that Lucifer tends to do.

Of course that won’t stop him from attempting to get Chloe on side with his ongoing personal investigations. However, still smarting from the events of Dec. 11th’s “Sinnerman” episode, Chloe is hurt, offended, frustrated and in no mood to help Lucifer pursue any personal leads.

His solution is to unsubtly make it “all about her” (the episode’s title) for a day or so, so that she in turn will make it all about him. Watch for a series of obvious, ham-fisted and embarrassing overtures from our favorite devil as he attempts to win back Chloe’s friendship.

Our favorite is his attempt to helpfully refile her work cases into colorful folders marked Sexy Victims, Obvious Killers, Boring Crimes and Hot Suspects. He also waters her plant. Copiously.

Lucifer may not have his devil face, but he’s on top form this week.

One person who is most definitely not on top form however is Ella Lopez, who will be heartbreakingly heartbroken tonight, and it just hurts our souls to watch. The cause? Those last harsh words from boss/crush/hero Marcus Pierce, who, as you may recall, snapped at Ella for talking too much. Ouch!

But help is at hand. Someone is not happy to see LA’s most enthusiastic forensic expert moping like a lost puppy, and takes it upon herself to have a word in Pierce’s ear on her behalf.

And yes, in case you’re wondering, Pierce is definitely not having an easy time of it this week.

Neither is Amenadiel, who to his horror discovers that angels can get STDs just like the rest of humanity.

Meanwhile, fans of Kevin Alejandro’s naked torso have reason to celebrate. Dan will (rather impressively) take to the waves this week when he goes undercover as a surfer in his attempt to catch a murderer.

We’ve got some photos from our official gallery to share below.

LUCIFER Episode 3x12 “All About Her” 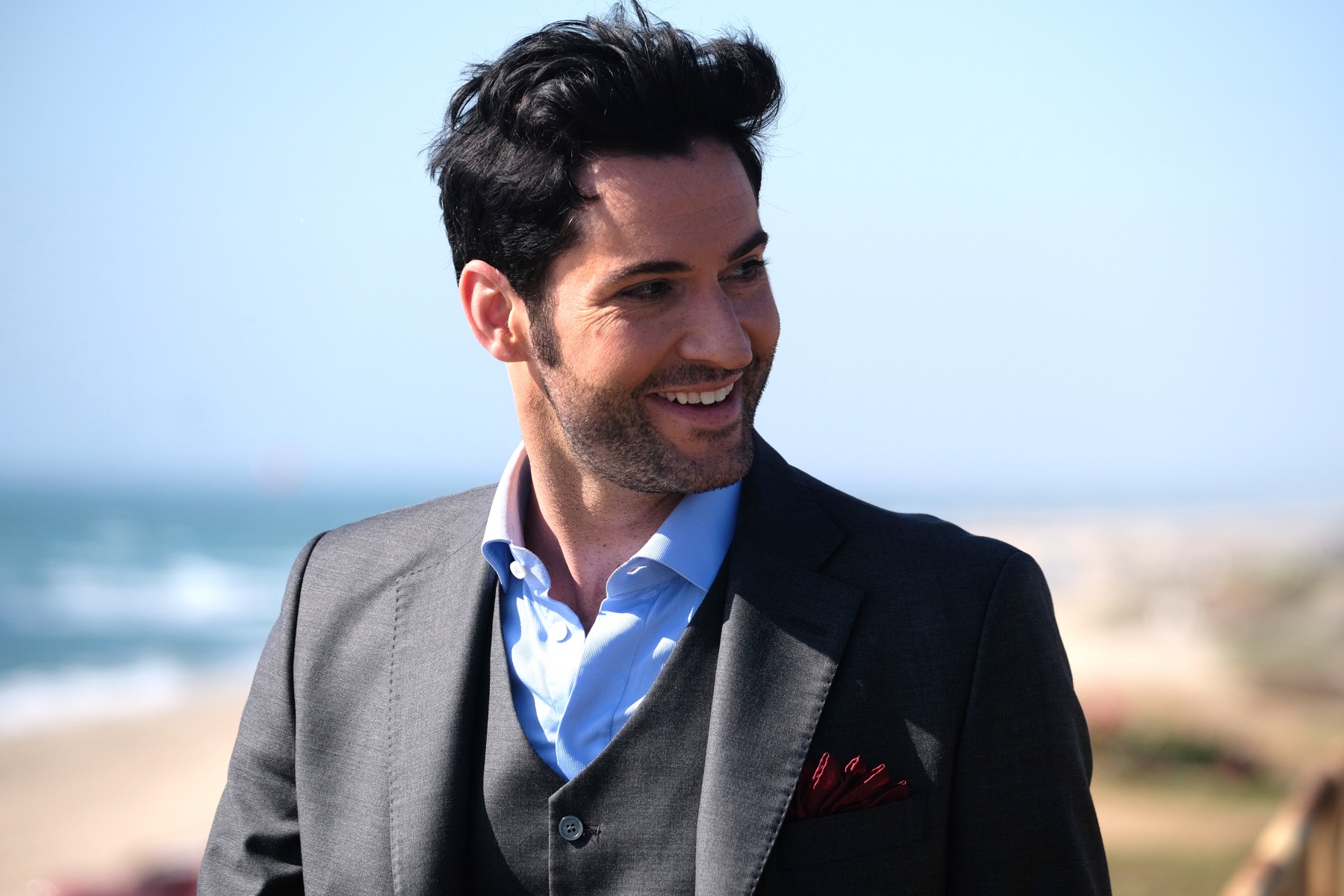