After a morning filled with Shadowhunters and Stitchers, it was off to the Timeless Fan Celebration panel. This was a panel I had looked forward to for awhile, because last year at Comic Con I was lucky enough to see the pilot and wrote about how much I enjoyed it, and knew it was going to be a hit. However, as you all likely know, Timeless was cancelled at the end of the season, only to be resurrected a few days later because of the incredible fan support. As such, this panel promised to celebrate the fans, and it really did.

The panel started out with a three minute video, which you can find online, and should definitely check out. T-shirts were thrown into the crowd emblazoned with the now official fan name of Clockblockers, and then the crew got down to answering questions. After talking about how emotional it was to film the final scene of season one (which was the reveal of Lucy’s mom being the head of Rittenhouse), talk turned to what fans could expect from season two, and it sounds pretty amazing.

A major change to the show in season two will be that it is now filmed in LA versus Vancouver, which opens up whole new possibilities for storytelling that wouldn’t have been possible in Vancouver. Eric Kripke noted that filming in Vancouver was wonderful, and allowed them to do things there that aren’t possible in LA, like a Western in the snow, but they were all looking forward to the move.

Next, the main antagonist will shift this season. With the truth now out about Lucy’s mother, and since Rittenhouse has their hands on the time machine, the team will find themselves aligning with Garcia against this common enemy. With this new danger, we’ll see the characters continuing to grow and change as they did in the first season, most notably with Lucy focusing less on preserving history, but instead realizing that the people involved are more important than history. Additionally, Garcia now finds himself not in control, which has shattered his faith, requiring him to grab onto something that once again will give him some sense of control. Ultimately, the team will have to decide how much damage they’re willing to cause to win the war against Rittenhouse. All in all, it sounds like a great season, which will premiere in 2018 with 10 new episodes.

Next up was the Legion panel. Ballroom 20 was filled to capacity, and they were not let down as the panel opened with a 7 minute clip from season 1 which was one of the most unique sequences ever seen on tv. With the clip over, the cast came out to discuss the previous season, and how it was so heavily influenced by music. In particular, they talked about the Bollywood dance number, and how visually striking it was. Ironically, Dan had food poisoning while filming that scene, so he talked about how difficult the shoot was, but both he and Rachel agreed that practicing for it was something they’ll never forget. Aubrey Plaza also made sure to mention several times how appreciative she was of the scripts, which were written in a way that all of the actors could take incredible risks, which ended up paying off big time on screen.

Executive producers Jeph Loeb and Noah Hawley then went on to discuss the new season, where they promised that audiences will meet the Shadow King, who will be played by Wonder Woman alum, Said Taghmaoui. Additionally, the backstories of several of the characters will be explored, which will shift the point of view, and build empathy for these characters and help explain why they’re doing what they’re doing.

Then, to close the panel, Noah dropped the hint that he’s working on a Dr. Doom movie, so fans need to be on the lookout.

Immediately following Legion, was the introduction of Marvel’s Inhumans. Executive producer Jeph Loeb took over moderating duties, and made sure the audience was aware that the first two episodes would be shown in IMAX theaters on September 1, which the show then airing on ABC on September 29. With the chant he created in the ballroom, no on in there will forget those dates, and will be sharing them with friends.

Jeph then introduced the full cast of the show, and the crowd was in shock and awe when Iwan Rheon took the stage. Each actor discussed a little about their character, with Mike Moh impressing the audience with his background in tai Kwan do which includes his own school, and five world championships. His training helped him to play Triton, and he was impressed with Sonya Balmores’ ability to keep up.

The audience then were able to see two clips from the show, including the opening sequence which had Triton on earth trying to save a young girl who was clearly also an inhuman. The second clip was like a “family” dinner, with the rest of the inhumans sitting around a table, and the audience got to see Bolt’s unique way of communicating, which is similar to sign language. Actor Anson Mount was quick to point out it isn’t actually sign language, and worked hard to make sure there wasn’t any crossover.

Two more clips were shown which highlighted both Gorgon and Karnak’s fighting abilities, and showed the complicated relationship of Medusa and Maximus. Turns out, the reason the whole pilot couldn’t be shown was because over 600 FX shots are needed for the first two episodes, and they were still being worked on. However, on September 1st, fans will be able to dive into this new world of Inhumans, and it looks like it’ll be a wild ride.

The last panel of a very long day was for Dark Matter, and it was by far, the best of the day. The cast clearly really get along with each other, and most of the hour had them joking around with each other and laughing. They seemed to be having a great time, and it translated to the audience as well. In fact, one fan got up to ask a question and said he had so enjoyed the camaraderie of last year’s panel that he made it a point to come to this year’s and said it was even better.

Executive producer Jay Firestone then talked about how much the show had changed since the original plan, including killing off One to show how vulnerable these characters really were.  Additionally, Five has had to really grow and change from being the kid of the group, and while she’s hanging in there, it’s not clear how much longer she can last.

Alex Mallari then talked a lot about how much he enjoyed playing the bad guy, and how he wanted to take fans on an emotional journey. He said the writers had done such a great job of just letting him play, and that he appreciated the reaction he was getting from fans.

Anthony Lemke then discussed the challenges of playing a character that was in love with a computer program, but loved working with Natalie Brown, so it was easy to do scenes with her.

Melissa O’Neill then talked about how Two’s confidence had really been rocked, and that the weight of her decisions was starting to weigh heavily. As such, she was beginning to let go of her responsibility, and allowing the others to step up in their roles.

The whole cast then discussed the overall message of the show that it’s harder to be good than to be evil, and how that affected each person. Melissa noted that Two’s decisions, while noble, were actually really selfish. She cared much more about the few people around her than everyone else. Jodelle Ferland noted that even Five was willing to do anything to protect those she loved.

After seeing a blooper reel from the season, that Jay teased as being very Canadian (there were a lot of people saying sorry), the cast talked about how much they wanted fans to see episode 9, and that the final moment of the finale was going to be crazy. Jay teased “gateway” and that something was coming, leaving the audience wishing the new episodes were already available.

With that, the day ended and day two is on the horizon. Stayed tuned for more! 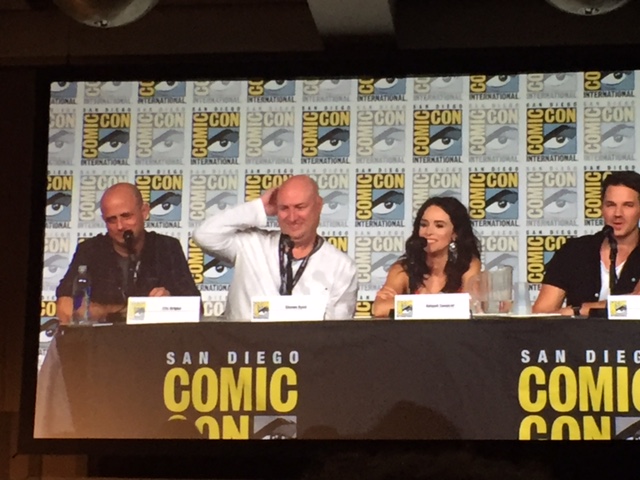 EXCLUSIVE: THE BLACKLIST is Coming Back and Here’s What You Need to Know

Take a Peep at THIS IS US’ Season Finale “Moonshadow”