We’re not saying we didn’t love last week’s episode of Timeless … but we did feel a little let down by the Wyatt and Lucy ‘almost kiss’ that was forced to take a back seat, thanks to circumstances, on Sunday.

“The Darlington 500” found Wyatt, Lucy and Rufus in 1950’s South Carolina, where they embarked on a mission to stop a Rittenhouse sleeper agent from destroying the American car industry. Along the way, the team met up with the legendary Wendell Scott (guest star Joseph Lee Anderson), America’s first African-American NASCAR driver.

While eluding the authorities, Wyatt and Lucy found themselves in a tight — but not all that uncomfortable — spot in the trunk of Scott’s car, where the couple bonded over their problematic parents and came this close to sharing a kiss. However circumstances (and the sudden appearance of Rufus), poured cold water on the moment, leaving some fans wondering if this almost-couple will ever manage to get together.

This week our trio of time travellers will find themselves in the glamorous environs of 1940’s Hollywood, and brushing elbows with famous movie stars like Hedy Lamarr, who as it happens, was also famously responsible for developing a radio guidance system for Allied torpedoes, which used frequency hopping technology to defeat the threat of jamming by the Axis powers. Working with her composer friend, George Antheil, this pair’s discoveries led to the invention of what is modern Wi-Fi.

The more you know!

When a Rittenhouse agent steals the only copy of the most famous movie of all time, Orson Welles’ Citizen Kane, our trio team up with Hedy and George to get it back, using science, espionage, celebrity impersonations, and singing.

Well, it is Hollywood after all.

This lighthearted homage to the golden age of movie making sees Abigail Spencer’s Lucy forced on stage to sing for an audience when she pretends she and Wyatt are Preston and Logan — Hollywood’s latest thing. Knowing his terrible singing voice will give him away, Wyatt urges Lucy to take the stage alone, where she performs “You Made Me Love You” (I Didn’t Want to Do It), rather pointedly in Wyatt’s direction.

Saving their cover, or sending a secret love message? You decide.

But that’s not the only #Lyatt moment we can expect this week In fact, if you are a fan of this duo, then this is definitely the episode for you. Absolutely. Positively. The. Episode.

Meanwhile Rufus similarly finds himself in a tight spot when he pretends to be famous poet, and social activist, Langston Hughes, and is asked to recite some of his latest Jazz poetry, off the cuff. Reaching deep, Rufus sets out to spin a story about how his life got flipped — turned upside down — if you will. Sound familiar? Catch the episode to see how this one goes down in full.

And finally, don’t miss the closing moments. Timeless doesn’t often throw an end of episode curve ball like this one, and you really won’t want to miss it. 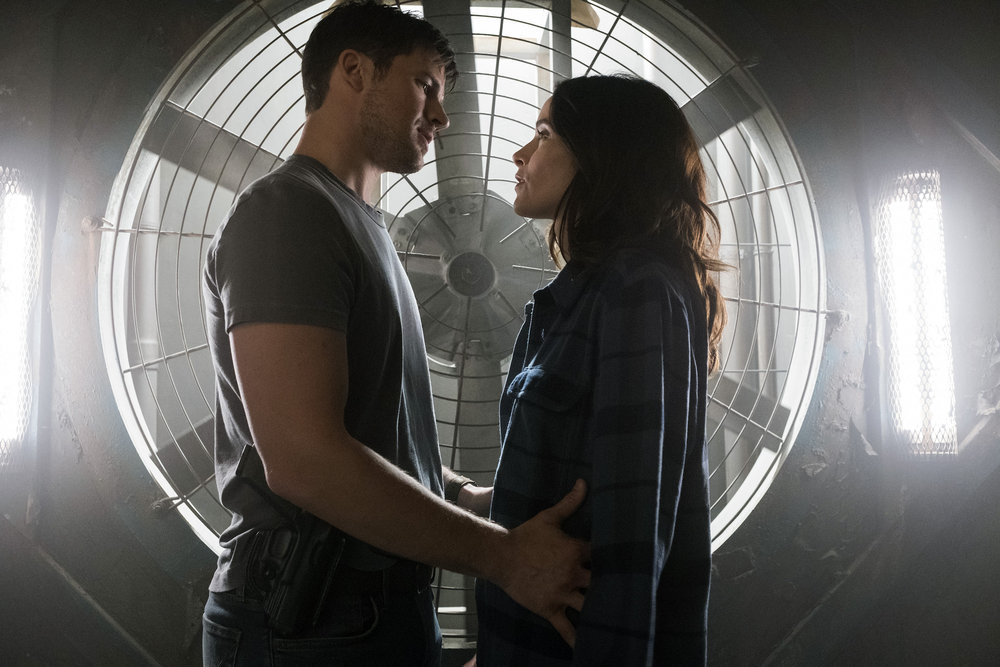