Home Articles TV Spoilers SUITS Season 7 Finale: Will They or Won’t They?

SUITS Season 7 Finale: Will They or Won’t They?

Note: This article does not contain spoilers beyond those found in the official loglines for the episodes under discussion, and the official photos released by the Network. It does however, contain strong opinions on #Darvey, and on the expectations fans of TV shows often have, and on comments made by series creator Aaron Korsh, which are entirely subjective, and not indicative as to where the show might take any character in the finale, or beyond. In short: Opinions are our own. Feel free to draw yours.

With a backdoor pilot in the offing, in addition to two major cast departures, it’s perhaps unsurprising to learn there’s a lot going on in Suits’ season 7 finale on April 25, as the show scrambles to strategically align its remaining key pieces on the board before a Chicago based, Gina Torres-led, spin-off hits the air.

Two back to back episodes that could have played out as a series finale, if the show had not managed to secure an 8th season renewal, will see a host of familiar faces returning to help and hinder our favorite characters at Specter Litt. Fans can expect to see Scottie, Jack Soloff, Jeff Malone, Robert Zane, and even Stanley Gordon dropping by for a cameo or two.

The first hour picks up the pieces of last night’s “Pulling the Goalie,” and will find the team finally referring to each other as family. However, they will come to realize that even a family pulling together may not be enough to stave off the interests of the firm’s previous senior partners.

Meanwhile Mike will come to realize that one day he will be asked to defend the indefensible, prompting him to carefully consider his future at the firm.

A second, rather rushed hour will attempt to bid adieu to Mike and Rachel via a touching, classy, and romantic wedding ceremony (catch the just-released photos below if you missed any), while also doing justice to Mike’s class action case. However, this hour also spends a chunk of change on Jessica and Harvey’s trip to Chicago, and while some fans will love the change of pace, style and edgier tone, others may not. (For the record, Jessica Pearson takes on corrupt Chicago is a show I am 100% there for.)

Among that latter group will no doubt be ‘Darvey’ fans, who have held onto an expectation that there will be some romantic payoff for Harvey and Donna by the season’s end.

An unrealistic expectation? While we are not allowed to divulge spoilers on the finale itself, our opinion is that these fans have had those expectations set by events in episodes such as September’s mid-season finale “Donna,” and April 11th’s “Inevitable” among others.

Donna and Harvey as will-they-won’t-they? romantic partners is a storyline that has received a lot of attention this season. In fact, series creator Aaron Korsh addressed the ongoing hype, teasing that the finale will see “slow dances and more” and that “Darvey fans should be satisfied.”

Will they? While that’s not for us to say here, our opinion on fan expectations, which is not based on any events in the finale of this particular show, is that there is often a disconnect between what show creators think fans will like, and what fans actually want. Occasionally, fans hoping to see actual romantic development between two characters are disappointed by the tossed breadcrumbs their story receives, despite how the show creator may have inaccurately set the tone — and those pesky expectations — beforehand.

We’re looking at you, Scully and Mulder.

As for Suits? No doubt fans will be happy and unhappy in equal measure depending on how they feel their expectations have been met next Wednesday. With the aforementioned pieces aligned ahead of season 8 (and with the show’s only long-term romantic couple now departed) Korsh and the Suits team may be planning a long game for some of its characters going forward. But who can say? Opinions are just that for now.

Suits bids adieu to our TV schedule with a double episode finale on Wednesday, April 25 on USA Network. 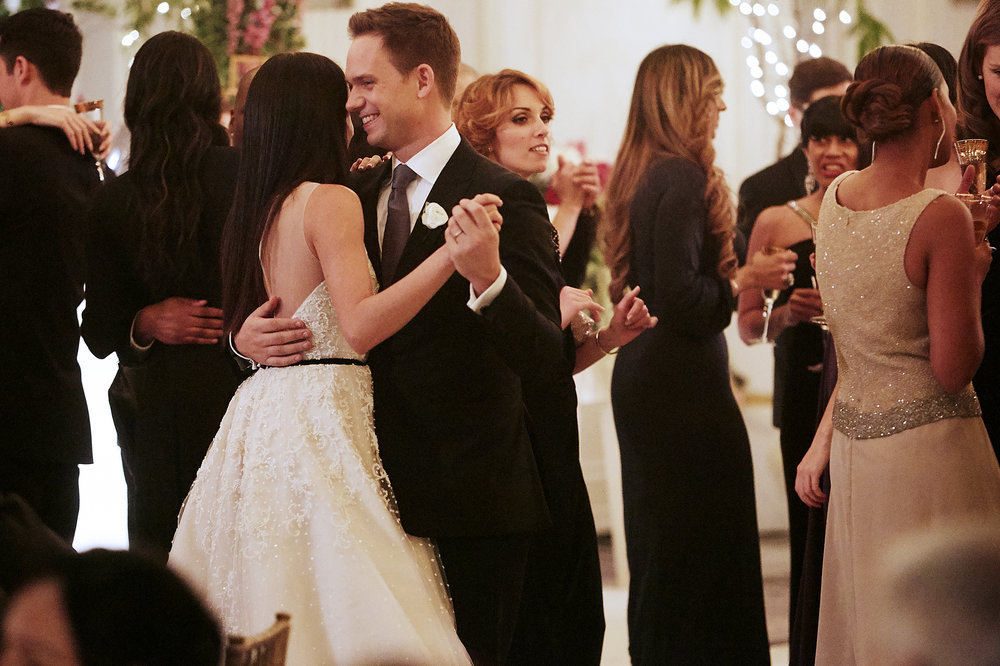